The CSS Neuse Civil War Interpretive Center showcases the North Carolina’s largest historic artifact and state of the art exhibits. The remains of the CSS Neuse and the associated artifacts were relocated to a fully enclosed and climate controlled facility at 100 N. Queen Street on June 23, 2012. After years of planning and hard work the museum held its grand opening on March 7, 2015.

Want To Know More About The CSS Neuse? 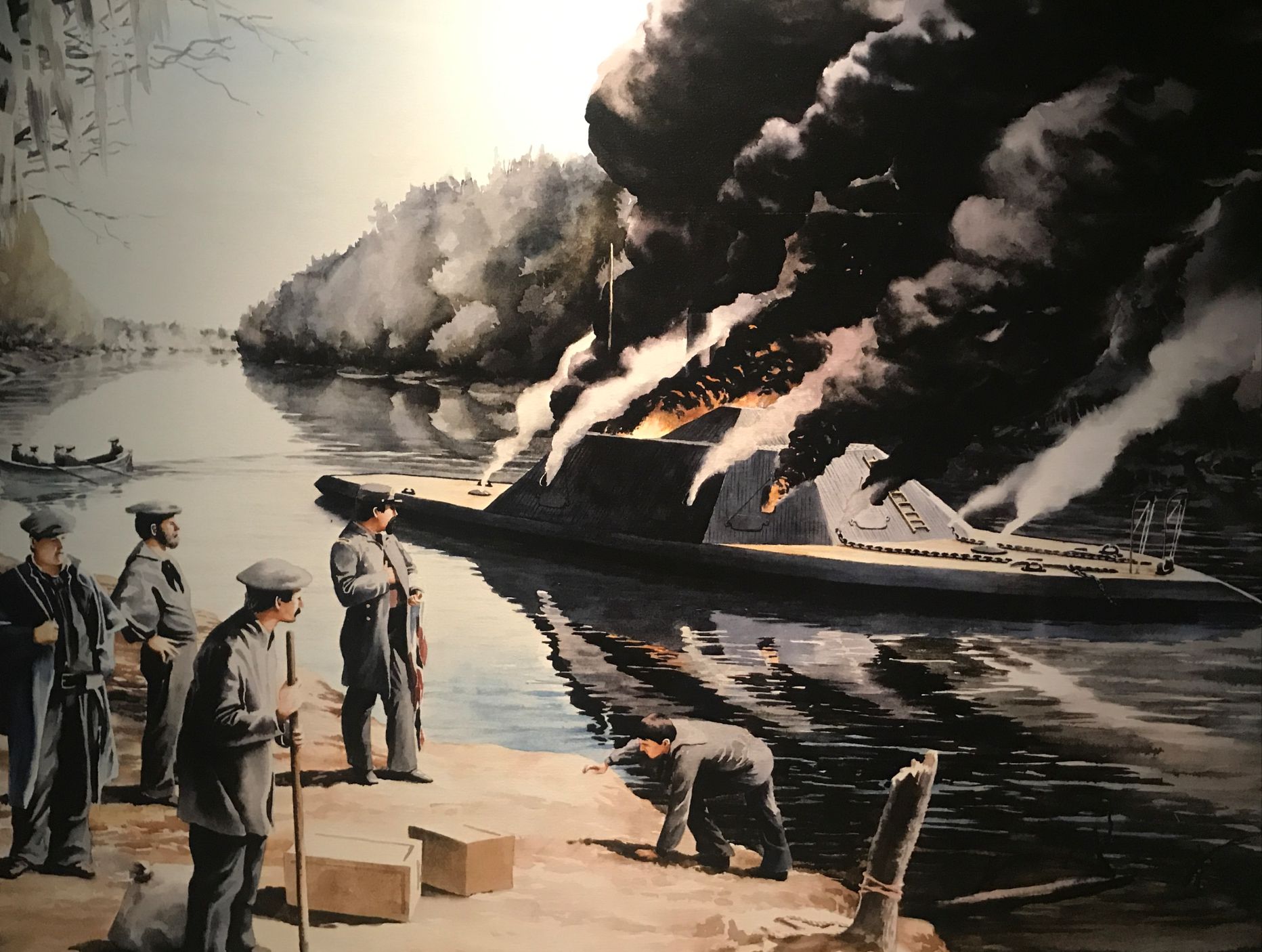 The CSS Neuse was a Confederate gunboat. Work began in October of 1862 on the bank across the Neuse River (her namesake) from the small village of Whitehall, North Carolina (present day Seven Springs). The hull of the gunboat was 158 feet (48 m) long by 34 feet (10 m) wide, and she was constructed mostly of locally abundant pine, with some 4 inches (100 mm) of oak used as sturdy backing for her 4-inch-thick (100 mm) wrought iron armor. Many delays in construction were incurred by a lack of available materials, mostly the iron plate for her armored casemate and deck; her deck armor was finally left off so the ironclad could be completed and put in service. Due to continuing iron plate shortages, Neuse became the first of several Southern ironclads built with unarmored decks. This situation was compounded by the Confederate Army exercising priority over the Navy in the use of the South’s inadequate railroad system for transporting vital war material.

Launched in November 1863 while still needing fitting out, Neuse finally got up steam in April 1864 for duty on the inland waters of North Carolina as part of the force under Commander R. F. Pinkney, CSN. Shortly thereafter, the ironclad grounded off Kinston due to her mostly inexperienced crew, which had been conscripted from the Confederate Army; she remained fast in the mud for almost a month until finally being refloated. After that, due to a lack of available Confederate Army shore support, she never left the river area around Kinston, serving instead as a floating ironclad fortification. In March 1865, with Kinston under siege by Union forces, gunpowder trails were laid down which led to a cache of explosives placed in her bow; the crew then lit fires astern and amidships, and she was destroyed a short time later by fire, then a bow explosion. Neuse burned to just below her waterline and then sank into the river mud preventing capture by the rapidly advancing Union Army forces, commanded by Major General John M. Schofield. At some point following the war, her sunken hulk, lying in shallow river water and mud, was salvaged of its valuable metals: cannon, carriages and their fittings, anchors, iron ram, casemate armor, both propellers and their shafts, and her steam power plant. Whatever bits and pieces remained, including her projectiles, lay undisturbed in and around the wreck until Neuse was raised nearly a century later. 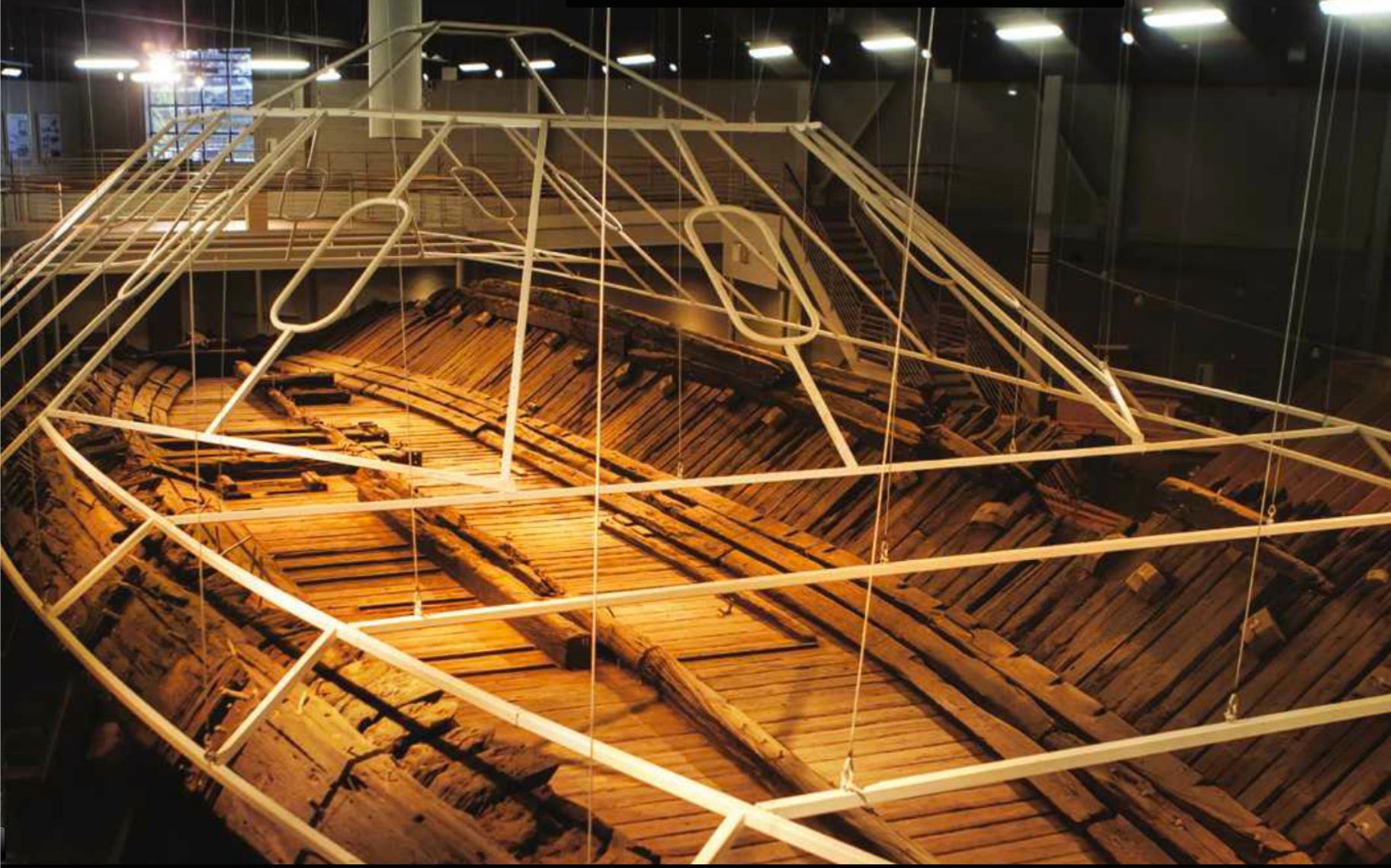 The architectural design of the CSS Neuse Civil War Interpretive Museum had a number of openings that were intended to house faux shuttered windows and doors to cover faux openings. So we created arched, louvered shutters on the top and herringbone, slat, faux doors on the bottom to give the look of an antique warehouse.

To add beauty and protection to the building we created custom, louvered window panels to fill all of the window openings. These privacy, exterior window shuttered panels were made of Extira Board with a painted black finish. They were made for standard and double window configurations with arched tops. 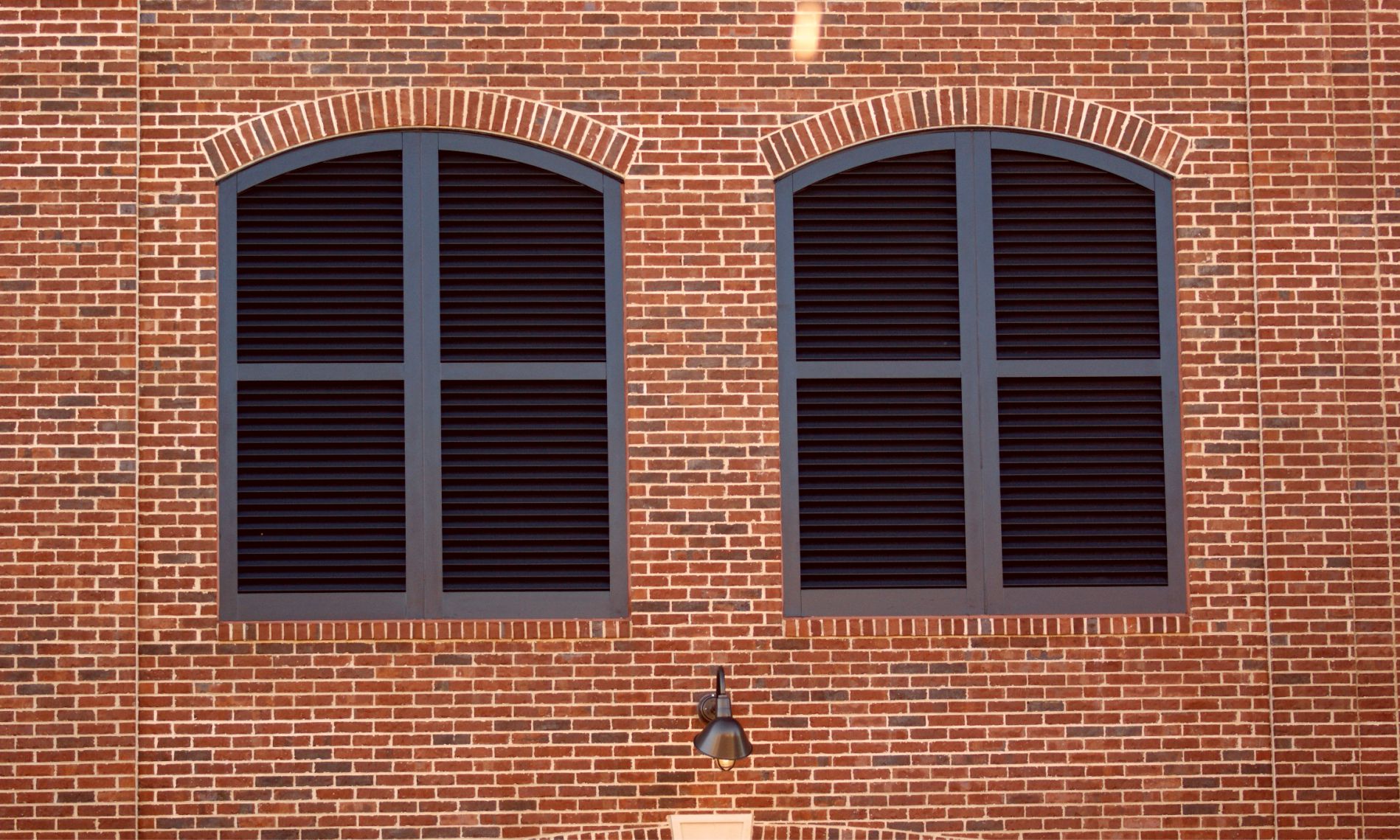 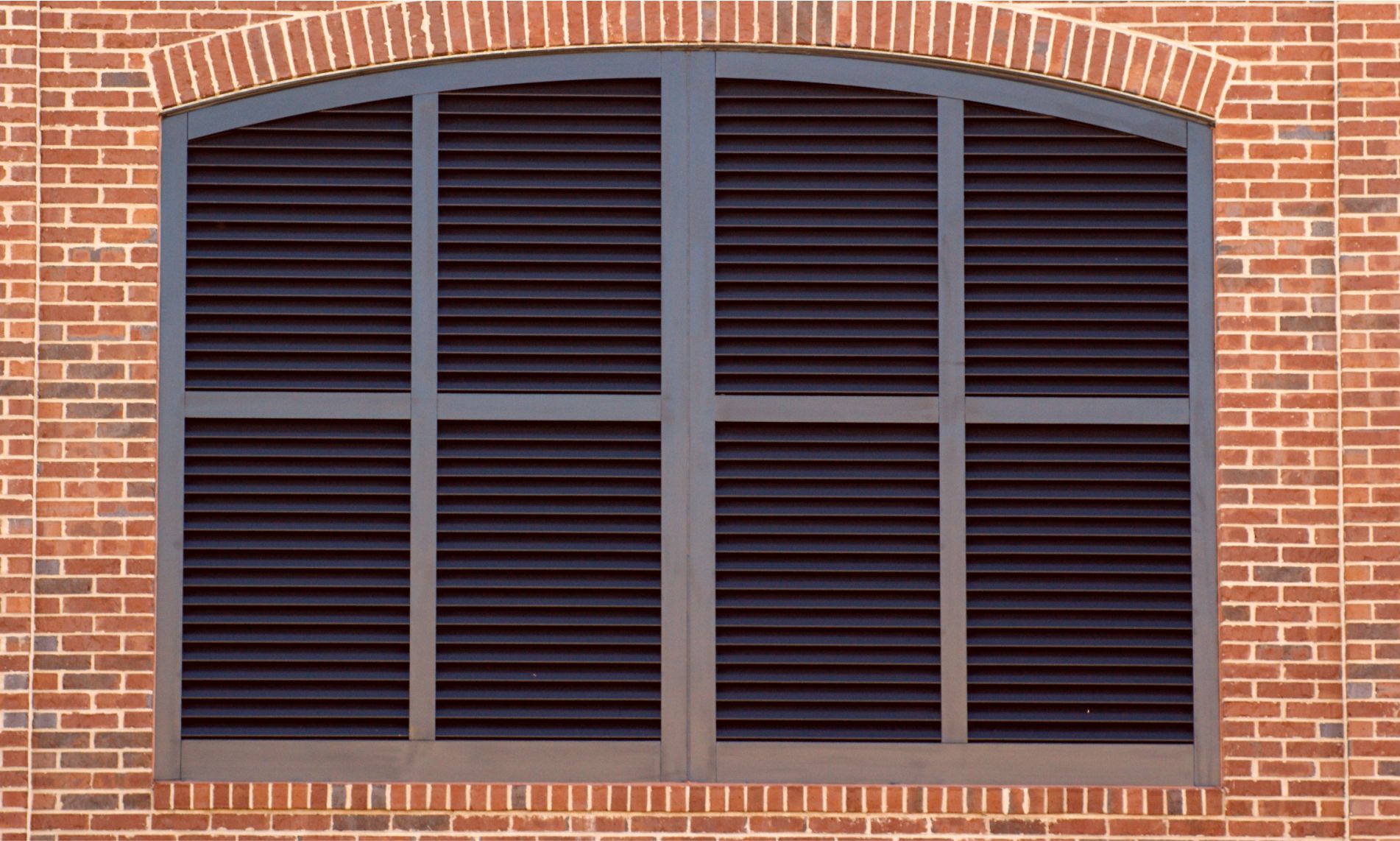 There were also large, expansive door areas that needed to be protected and covered. So we created arched top, faux door panels with framed, diagonal slats to give the areas an attractive look with maximum protection. The doors were made of Extira Board with a painted black finish. The doors also included hidden, drain panels behind them to help channel the water during rain.

Shutter Revolution provided the construction of the door and window panels as well as installation, caulking, and finishing. 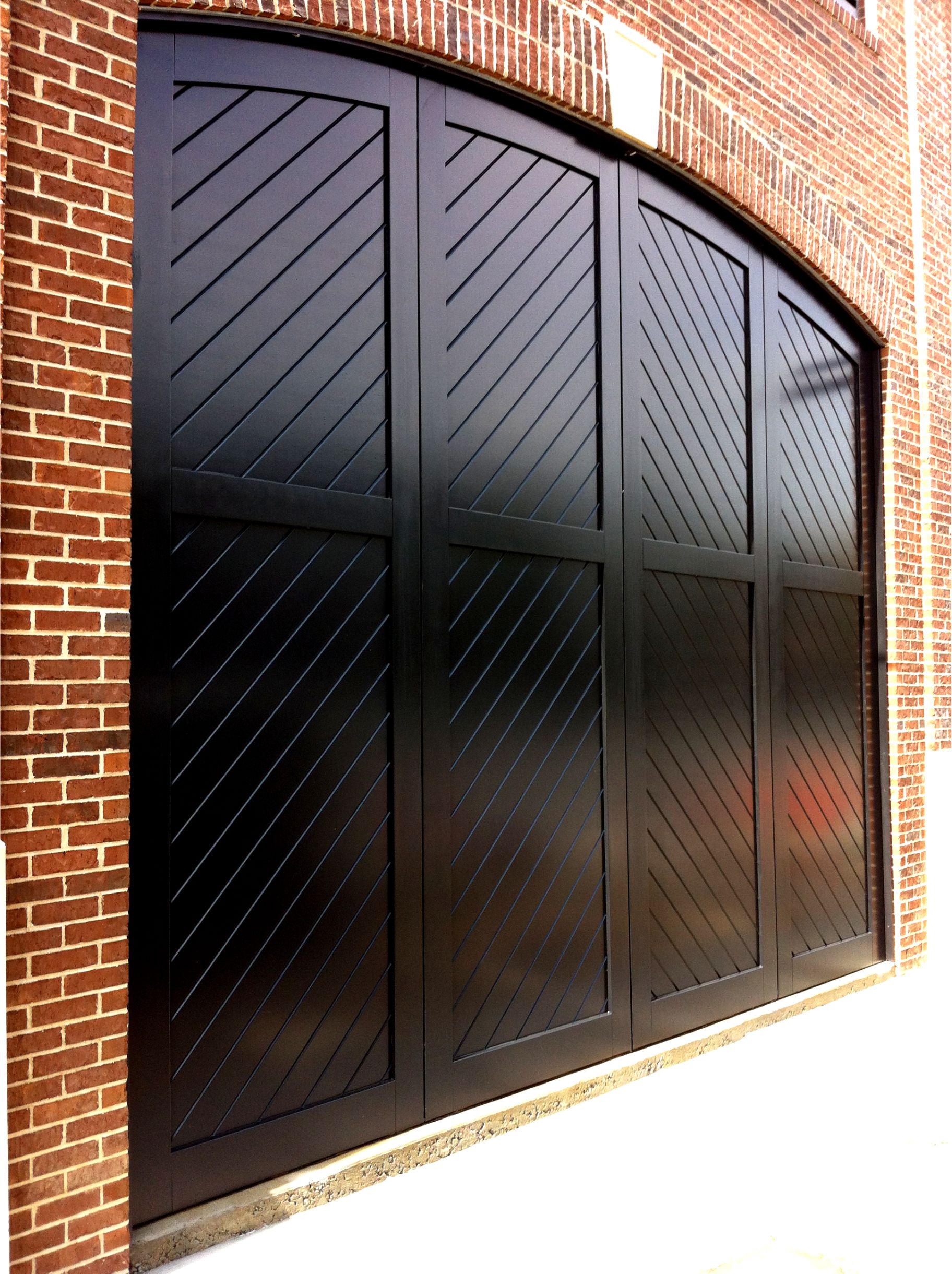 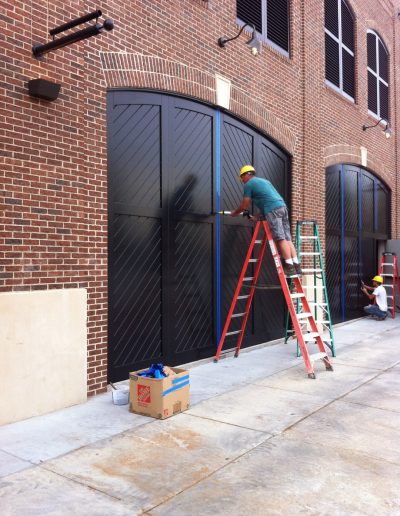 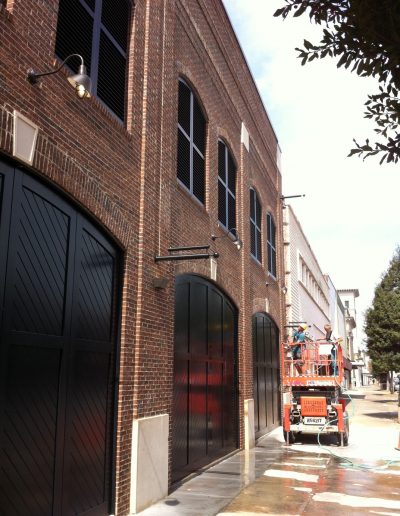 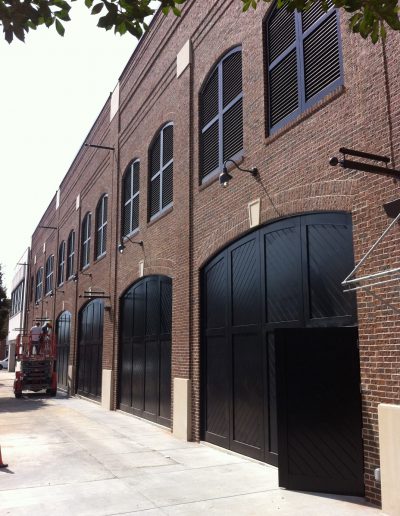 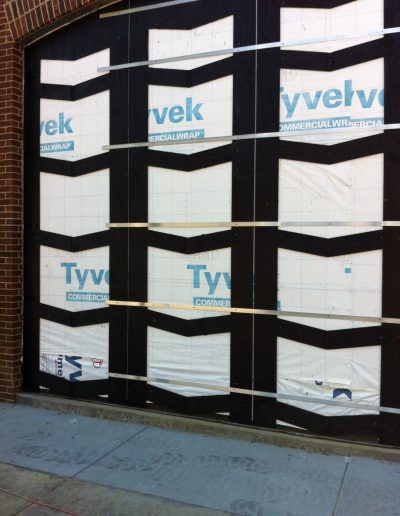 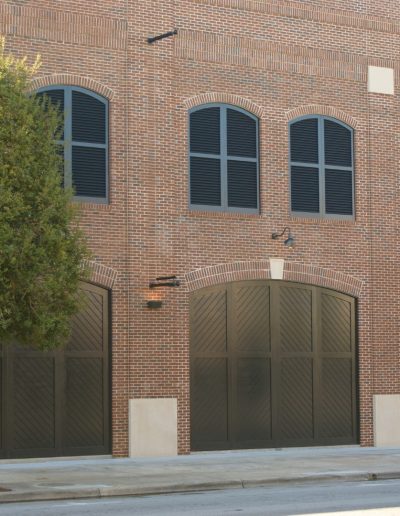 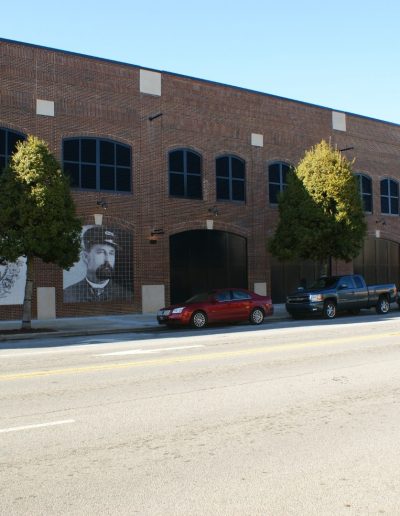 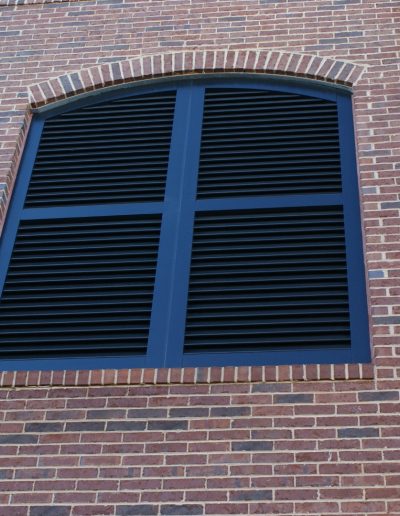 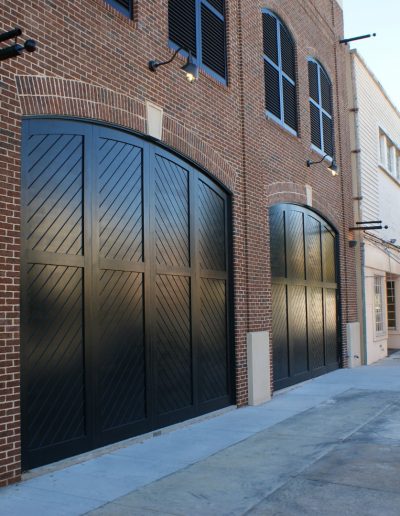 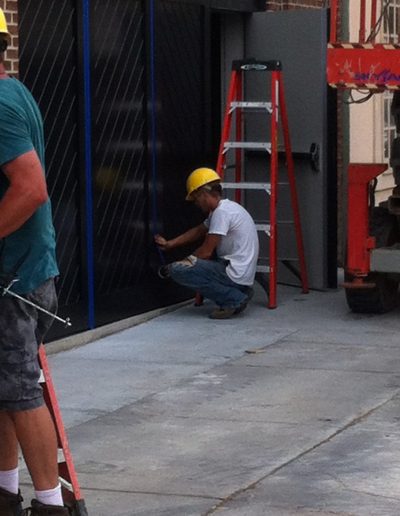 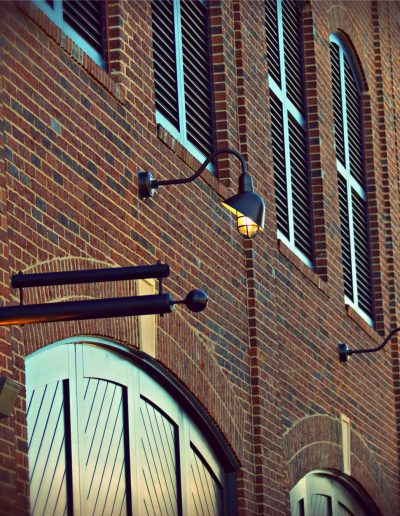 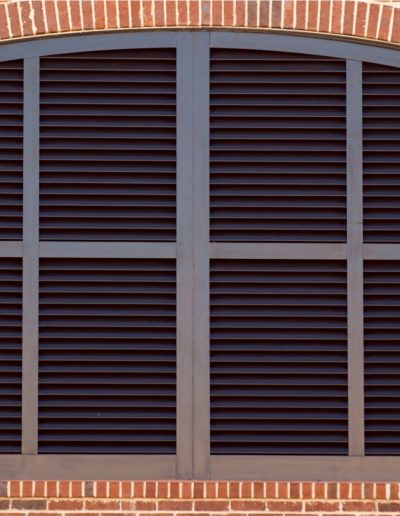 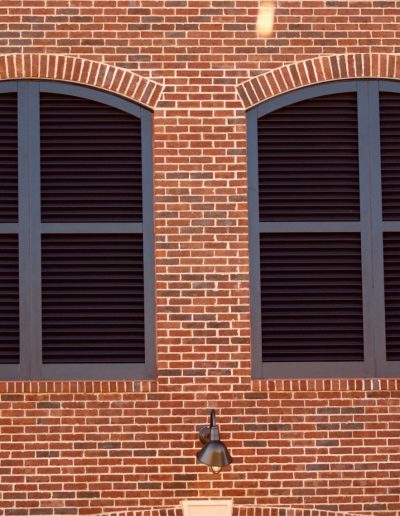 We are able to help you complete any project with just about any need you have. It doesn’t have to just be shutter related. We have an extensive portfolio of installations, displays, and lots of other projects that we have completed for companies all across the world.